Mechanical Switches come in a wide range of styles to suit a variety of applications. The metal contacts inside the switch can be described as;

In a switch where the contacts remain in one state, the contacts can either be normally open (abbreviated "no") until closed by operation of the switch, or normally closed ("nc") and opened by the switch action

There are a wide range of different switches for a the many applications they could be used. Importantly they all have the same function of controlling the flow of current around a circuit.

A Tilt Switch is a metal tube filled with an inert gas and a sliding metal contact. As the tube is tilted to a specific angle the contact moves along the tube making an electrical connection. Mercury was used as the conductor prior to it's toxicity being realised. Used primarily for movement sensing in alarms, arcade machines and vending.

A Membrane Switch, unlike other switches, ​has no mechanical moving parts. Multiple switches can be placed under the membrane by designing the PCB to have open tracks where required. The plastic membrane is flexible and is layered with a number of small metal domes over the open contacts on the PCB. When the user applies pressure to the membrane the dome flexes and makes contact with the PCB connecting the open contacts. Used primarily for control panels as they are highly reliable, low cost, water proof and resistant to fatigue

A Reed Switch is a magnetic switch. One side is the magnet and the other switch contacts encased in a glass tube. As the magnet comes near the contacts they are attracted together enabling the switch. Typically used in door and window alarms due to the lack of physical contact required to enable them which prevents mechanical fatigue over time.

A Mircoswitch has a small pole placed under a metal spring lever. As a small amount of pressure is applied to the end of the lever it applies a larger force to the plastic pole of the switch making contact with the throw inside the case. They are incredibly durable and provide a reliable digital signal. Due to the design, they are used to detect small amount of force in printer copiers, CNC, robotics, safety features, machinery and in the automotive industry. ​

A Relay is an electromagnetic switch used to interface between circuits with different voltages. When the coil of wire inside the case becomes engergised a magnetic field is created pulling the switch contacts on the other side together, completing the circuit. Importantly, there is no electrical connection between the circuits.​ Solid State relays also exist to remove the issue of mechanical fatigue that can occur with traditional relays. They use an opto-isolater,  which is an infrared LED and photo transistor that switch using light, so require no moving parts.

Pressure switches (fluid) have an internal rubber diaphragm that when filled with air or liquid, applies pressure to the sprung contacts connecting the switch. ​​They can be set to switch at different levels of pressure and used widely in Hydraulic/Pneumatic equipment.

Mechanical pressureswitches can also be used to detect physical force for use in pressure-sensitive mats that could automatically open doors or set of an alarm. 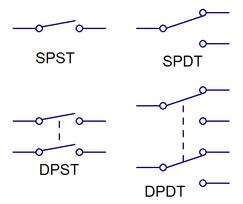 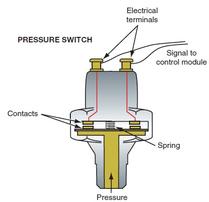 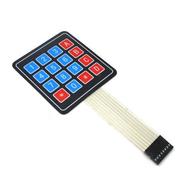 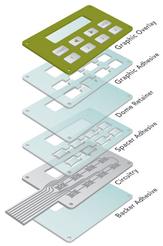 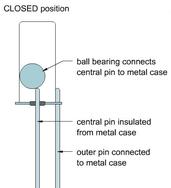