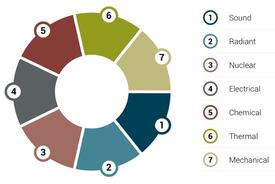 A transducer is an electronic component which converts one form of energy into another. There are two main types of transducer; Active (non-powered) and Passive (powered). There are many inputs and outputs which are termed as transducers and these are some of the inputs and their possible uses -

A Light Dependant Resistor (LDR) is a variable resistor that depends on light (LUX) to alter it's resistance. In low light the LDR has a very high resistance (1MΩ) and as photons of light hit the surface the photoconductivity of the material causes the resistance to drop. This transfer of light to electrical resistance makes its a transducer.

A Phototransistor is a type of transistor which replaces the base leg with a photoconductive semiconductor layer. Unlike an LDR they act as a digital switch and allow current to flow when photons of light hit the surface of the lens. They will not measure differing levels of light. They can be found in infrared remote circuits and opto-isolators. Transfer light to conductivity.

A Piezoelectric transducer is a quartz crystal which is electrically neutral. When a slight mechanical pressure is applied it produces a electrical charge which can be measured to determine the force applied. It takes advantage of the 'piezoelectric effect' and can detect incredibly small forces applied to it.  Transfer of mechanical energy into electrical energy

A Microphone further utilizes the piezoelectric effect above and produces voltage when soundwaves vibrate on its surface. The use of a piezoelectric crystal within a dampened enclosure allows the capture of soundwaves which can be amplified. Transfer of sound waves to electrical energy

An ultrasonic range finder ​is used to convert ultrasonic frequency waves into electrical energy.  The component emits a wave which is reflected back and detected by the piezoelectric sensor to determine the distance from an object. They can be used to accurately measure distances much like sonar & can be found in parking sensors.Converts ultrasonic energy to electrical

A moisture sensor is a variable resistor used to detects levels of moisture through the amount of resistance typically in soil. The higher the water content the lower the resistance as water is a conductor. Other methods can use sound waves and voltage levels of the soil. Converts moisture levels to electrical resistance. 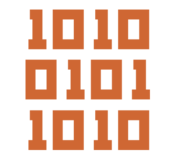