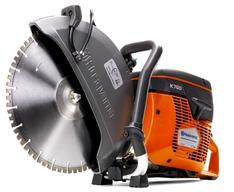 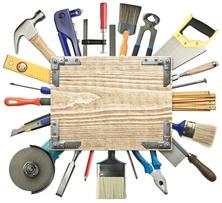 There are a number of different tools designed to cut and shape material through 'wasting' -the removal of material. The most common of these is the saw which consists of  blade with a rough toothed edge. Force is applied laterally to the blade in a reciprocating motion to cut. Teeth on the blade can be arranged in different patterns to suit different applications and materials. The two most common are 'Rip' & 'Cross Cut'

Ripsaws are designed to cut timber with the grain and make whats known as a 'rip cut' into the material. The cutting edge of each tooth has a flat edge and is angled back around 8°. Each tooth cuts much like a chisel and carves a path into the material. This prevents the saw from following the grain and going off the desired path when cutting. Ripsaws have teeth that are designed to cut on the forward stroke and not the back

In contrast a cross-cut saw blade is designed to cut across the grain of the material and implements a larger tooth angle of around 15°. The teeth are bevelled to form a knife edge that cut across the wood fibres and alternate along the blade, cutting two channels. As with the ripsaw the cutting points on the blade cut on the forward stroke of the saw. Some cross-cut saws use 'rakers' which clean the cut channel or 'kurf'

A Tenon saw is a type of saw designed to cut straight lines into softwood and hardwood. The name comes from its use for cutting mortise and tenon joints which require a straight edge. It has a short stiff blade with a wooden or metal spine running along the top. The teeth on a tenon saw are arranged in a cross-cut pattern with around 10-14 teeth per 25mm (inch), which is comparatively high to ensure a neater finish. Having a higher teeth density means they cut slower through material and allow for greater control and accuracy

A Coping saw is designed for creating curved cuts into material and has a much finerflexible blade for more intricate cutting. Its has a fine hardened steel blade which is stretched between two points along a flexible U-shaped frame. By unscrewing the handle and releasing the tension the blade can be removed to be passed through a drilled hole for internal cuts, providing they are no wider than the frame. The blade is typically fitted to cut on the backstroke using a ripsaw design but it can be changed and rotated for different applications

A Hacksaw is a fine  toothed saw designed to cut metal or plastic and much like a coping saw, the blade is tensioned in a U-shaped frame. Unlike cutting timber, plastics and metals require much finer teeth with a lower pitch to allow them to remove smaller amounts of material per stroke. Typically the ripsaw teeth are arranged in a wave shape and vary slightly to form curves along the blade. Blades can have anywhere from 14 - 32 teeth per inch (TPI), with higher densities suited for smaller cuts. At least 3 teeth should be in contact with the material when cutting. As with a coping saw, the blade can easily be removed and uniquely the frame can be adjusted for larger blades from 250mm to 300mm

Junior Hacksaws are smaller versions of the hacksaw and use a finer blade to cut, allowing for greater precision and finish. They are therefore only suited to thin metal and plastic due to a much lower tooth profile. The blades can contain the same tooth density from 14 - 32 TPI and have a small protrusion in each end to secure into the frame of the saw. Blades should be fitted with the teeth facing away from the handle to cut on the forward stroke. As with the hacksaw the teeth are arrange in a wave along the blade to cut wider than the thickness of the blade and prevent it getting stuck when cutting. Above 18TPI is recommended for steel 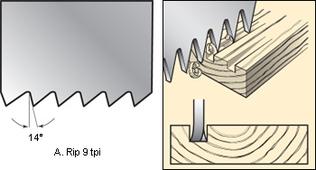 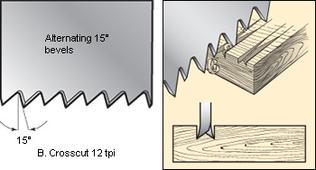