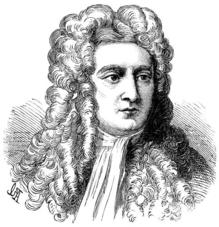 Issac Newton defined 3 laws of motions that relate to how an object behaves on earth;

There are 4 primary types of mechanical motion;

Most mechanical systems use a combination of these 4 motions to output the required force and are known as 'mechanisms'. The transfer of kinetic energy between each motion type can be achieved in many ways;

The use of a cam-and-follower can convert rotary motion into reciprocating motion. A cam is a rounded profile whereby it's central axis is offset. A follower is a straight piece that's placed on top of the cam and is forced up by the uneven profile and down by gravity

The distance traveled by the follower is know as the 'throw' and each rotation is known as a 'cycle'. A range of cam profiles can be used to achieve different reciprocating motions. They are found in a variety of mechanisms and vital to the automotive industry for components such as the crank shaft to transfer power from the engine

The shape of the follower can be altered to suit different applications;

Another method for transferring motion is the use of Levers. A lever is one of the simplest and oldest mechanisms that takes advantage of an unbalanced force pivoting on a Fulcrum. On one side of the fulcrum is the effort arm, where the dynamic force is applied. On the other is the resistance arm where a static force (load) is applied

> Class 2 Levers- These are defined by locating the load and the effort forces on the same side of the fulcrum. In this type of lever, the movement of the load is in the same direction as that of the effort. The effort arm must be longer than the load arm to be advantageous

Class 1 & 2 increase the input force applied through 'effort' to output far greater force upon the load. This is defined as a 'moment'. In order to calculate the moment you must know size of the forces and their distance from the pivot. The equation used to calculate each force is; 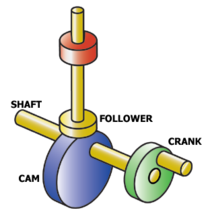 Example of a balanced lever 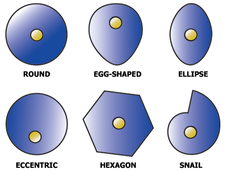 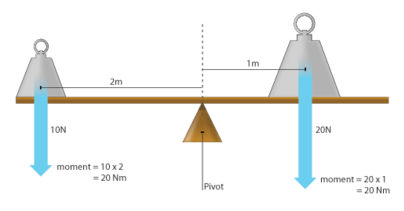