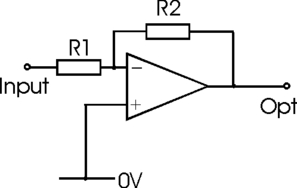 Operational Amplifiers are 8 pin DIL IC's that have two inputs and one output. They are used to amplify voltage differences at its input pins from weak signals. This amplification is known as GAIN and can be up to 100,000 times (providing it is below the supply voltage)

The most commonly used Op Amp is the 741 which operates on two 9V batteries, however, this has been replaced by the 3140 that requires 1. The Op Amp has an inverting input (-) & non-inverting (+)

When the Op Amp is used a Comparator it will compare the voltage at each of its inputs for any slight difference. This difference is then amplified by the GAIN & output to pin 6. The circuit shows this in use for a temperature sensor which can produce weak voltage signals

The GAIN of an op-amp can be controlled through the use of 'feedback resistors' which restrict the amplification at the output. As an open loop the GAIN is 100,000 which is too high for some applications and can cause signal distortion. Two resistors are used as shown to reduce the GAIN which is calculated using -

The Op Amp is also an example of a analogue - to - digital converter (ADC) as it will receive an analogue input signal from a sensor and output a digital signal from the output. In this way they can be used to interface with other IC's and PIC's 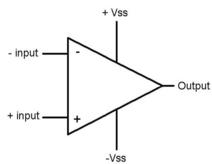 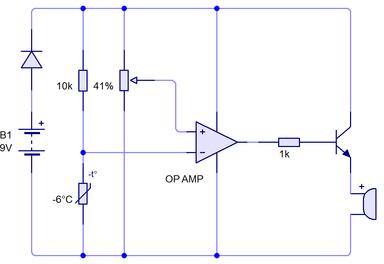