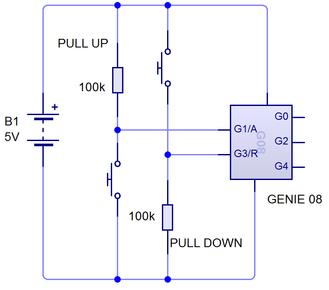 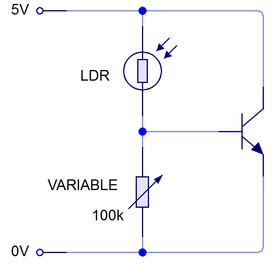 A resistor is a passive two-terminal electrical component that implements electrical resistance in a circuit. They are used to reduce voltage and current flowing around a circuit in order to protect components. They are manufactured in a series of values (E24).

Resistors are measured in Ohms (Ω) and vary the amount of carbon to adjust their internal resistance. Common values in school are 330R (LED's), 10K (Input Divide) and 1K (Base protection)

The resistors value is determined by a 4 coloured band (carbon film) which is read from with the tolerance band on your right.

When a resistor is connected in series with another the values are added together due to the increased resistance.

When a resistor is connected in parallel with other resistors the value must be calculated using the equation shown. In parallel the resistors divide the current around the circuit. Voltage across them is the same however and will total the supply voltage.

The calculated total resistance should always be less than the smallest individual value.

Potential Dividers are created when two resistors are used in series and the voltage in the middle is used within a circuit. This voltage will be less than the supply voltage and is calculated using this equation;​

Typically they are used within Sensor circuits to create a voltage divide with resistive components such as an LDR and Thermistor. The V out in the middle will be sent into a Transistor or Microcontroller (Genie) and used an input value in a circuit.

The use of a Variable Resistor allows adjustment to set the switching point of the input depending on the level of temperature/brightness required for the circuit. The change in voltage at V out makes this an example of an Analogue Input. Although shown with a transistor as  the 'process' component this could be a an Op Amp or microcontroller

A standard value for this would be a 100K Variable Resistor

​A potentiometer is a type of variable resistor but has a third connection which acts as a voltage 'output'. This will therefore do the job of a potential divider and output a lower voltage at the middle pin

The resistance is adjusted by rotation and can be used as a variable resistor if the middle pin is not connected. Often potentiometers are used in place of Variable resistors due to their rotational nature.​

Resistors can also be used as SIL or DIL resistor networks that house multiple resistors in one casing. As an SIL network all the resistors share the same 'common' (ground) indicated by a grey circle

In a DIL resistor network multiple resistors are packaged across opposite pins on the 16 pin DIL IC and are isolated form eachother. Both are used to aid the design of a PCB when reoccurring values are required.

Both are used when wiring microcontrollers (genie) or Logic (4017, 4026) to ensure a clear digital signal at the input pin (0,1). If unconnected the reading at the pin may confuse the IC/ PIC.

The pull up resistor ensure a constant 1 at the input whilst using little current and the pull down ensures a 0. Typically a pull down is always used when connecting a microcontroller (genie) input. Either can be used to the same affect but pull down is used in school 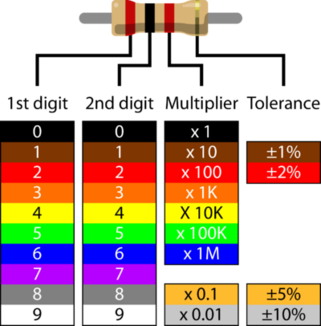