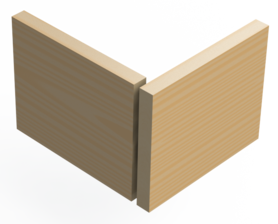 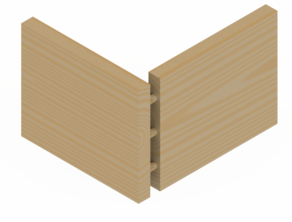 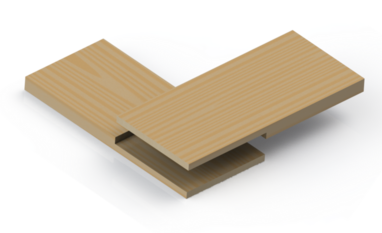 When joining timber parts together there are a number of different methods that can be used. One of the oldest methods is by cutting joints into the sections in order to strengthen the bond between the parts. These permanent right angled joints are known as 'frame joints' -

Butt Joints are the simplist of joining method as they require both sections of material to be pushed together at 90°. This joint requires the addition of adhesive or non-permanent fixings as their is a minimal amount of surface contact between the parts. As a result, this joint is very weak and often used in low cost furniture as it is simple to manufacture

Mitre joints are similar to butt joints as they rely on a minimal surface area to join together, however, they are cut at 45° angles. This allows two pieces to fit together to make a 90° angle, leading them to often be used for framing. They are slightly trickier to cut as the angle must be precise, but through the use of a mitre saw they can be manufactured easily

Lap joints allow for a larger surface area to join two parts together, compared to butt joints,  allowing for greater strength when using adhesive. Each piece has a section removed from the end half the width by the thickness of the material. They are often used for drawers and boxes for added strength, typically as half-lap joints (one lap)

Dowel joints are a method of joining two pieces together using wooden pegs known as dowels which are glued or friction fit into drilled holes. This method adds far greater strength as the dowels reinforce the bond between the sections and adhesive is bonded deeper into the timber. This method is ideal for large scale production as holes can be machined using a CNC router & parts quickly located/ joined through automation

Mortise & Tenon joints are comprised of a protruding 'tenon' & rectangular slot 'mortise'. The tenon is cut to fit the mortise tightly without the use of adhesive & sit flush on the 'shoulder' surrounding the tenon. A larger surface area is therefore available for adhesive to further strengthen the joint, making it one of the strongest wood joints. They require skill to manufacture accurately & the use of a mortiser

Housing joints are formed from a slot cut along the width of the work piece typically using a router. The second work piece can then be 'housed' within the slot and an increased surface area is achieved. Structural strength is along the slot allowing for its use in shelving units. It is equally useful for concealing base pieces in storage whilst maintaining strength

Finger joints or Comb/Box joints are when complementing rectangular sections are removed from the end of each workpiece in order for them to slot together at 90°. They are far more complex to manufacture but allow for an excellent joining strength due to the increased surface area for adhesive. Also, this style of joint is used to enhance the aesthetic of a product and can be used as a visible feature on high end furniture

Dovetail joints are the most complex of the box joints to manufacture due to the angular tail shaped pins and slots required. The design of the joint gives an incredibly high directional strength in one direction and are therefore often found on drawers. They are rarely used for larger volume production due to the complexity of manufacture

Halving joints are similar to lap joints, however, the workpieces are joined along the flat rather than the edge. This is a simple joint to manufacture and commonly requires the removal of half of the material width. The joint can be made as a slot along the material length or at the end. As a joining method this is relatively weak despite the increased surface area for adhesive and is prone to splitting/twisting. They are typically found in timber frame construction 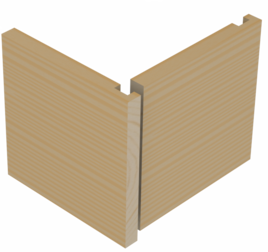 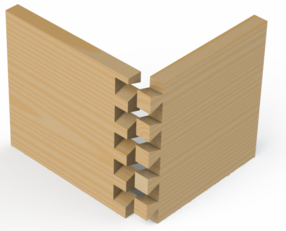 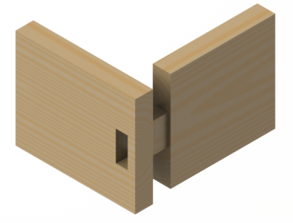 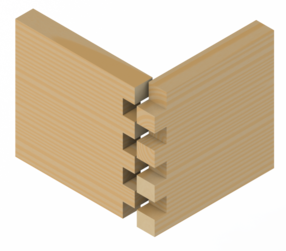 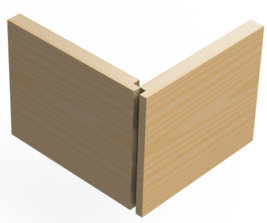 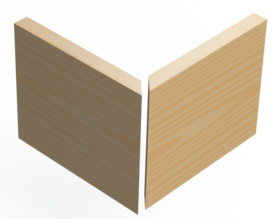