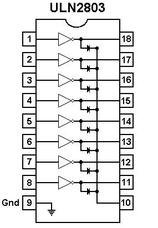 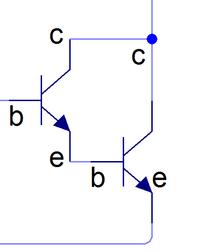 A bi-polar transistor is a three terminal semiconductor component that acts as an electronic switch in a circuit or a current amplifier. NPN transistors consist of three layers of doped semiconductor (silicon) with two negative areas and a positive. They are classed as a 'process' component

​When energised a transistor will not conduct electrons unless its base leg is charged. If a voltage of 0.7V or more is applied to the base the 'depletion layers' shrink and allow electrons to flow from the collector to emitter (ON). In this way a transistor is a Electronic switch

Although they are electronic switches  the NPN transistor is an Analogue component. Around 1.5V at the base will cause it to fully conduct

Transistors amplify current by combining the current at the Collector and Base to increase the current at the Emitter leg. This amplification is known as 'Gain'. The Gain of a transistor is represented by ' hFE ' and can be calculated using the following formula;  hFE = Ic / Ib

So if the current at the base collector was 100mA and the base current was 0.25mA then the GAIN would = 400 hFE

To further increase the current gain of a transistor a second can be added to form a Darlington Pair. This transistor configuration connects the transistors two collector legs and the emitter of the first into the base of the second. This makes the circuit far more sensitive to changes at the base leg and greatly increases the current with the combined Gain.

This increased Gain can be used to power high current outputs such as motors, sirens & solenoids. The total Gain = the Gain of the first transistor multiplied by the second. Often they are packaged within one casing.

​A Photo-Transistor replaces the base leg with a photosensitive layer which when illuminated will activate the base and allow current to flow. Similar to the function of an LDR except a phototransistor does not create any resistanceand instead performs like an electronic switch.

Darlington Drivers such as the ULN2803 can be interfaced with microcontroller (Genie) outputs to provide a higher current to components such as motors. Inside is an array of 8 darlington transistors which are protected by 'back emf supression' diodes. Multiple inputs can be used on the left of the IC for even higher current requirements 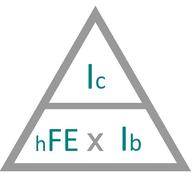