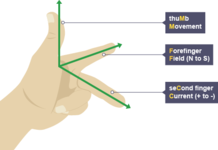 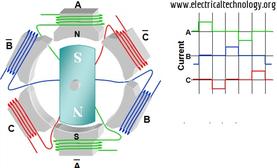 ​​​​​​​​​​​​​​Electromechanical components those which convert electrical energy into kinetic energy through movement. Typically they take advantage of electromagnetism to generate electromagnetic force.  An electromagnet is made through the coiling of copper wire around an iron core. When electrified the current flows around the coil of wire creating a magnetic field. The strength of the magnetic field is determined by the number of coils (windings) and amount of current.

The simplest use of electromagnetism in an output is found in the Solenoid. When a current is applied to the solenoid the magnetic iron bar surrounded by coils of copper wire is repelled/attracted to the magnetic field. The movement of the bar using electricity can be incredibly quick and resist large amount of force. Once the current is removed a return spring relocates the bar to its resting position. Push (protrudes) or Pull (contracts) solenoids can be used depending on the application

Solenoids create a linear motion using an electromagnetic field making them an example of a transducer. They are used in the automotive industry to enable contacts for the starter motor when the ignition is on

In a DC motor electromagnetism is used to create rotational force. Permanent polarised magnets surround a wired electromagnet core attached to an armature which is electrically connected via brushes

Brushless DC motors (BLDC) are widely replacing standard brushed motors due to their higher efficiency, durability and reduced size. Unlike a brushed motor which has a permanent magnet on the outside, a smaller magnet is located on the central rotor.

The removal of the brushes prevents sparking between the contacts which can occur in a DC motor causing cause damage that requires maintenance, shortening its lifespan. Equally, the size and weight can be reduced as well as the accuracy greatly increased through the use of microcontroller control. The two videos will explain both DC and BLDC motors in further detail

Stepper motors are widely used in CNC where specific positioning of the motor is required. As with brushless motors, electromagnetic coils are pulsed to produce movement. However, in the centre are two magnetic toothed gears and each coil around the outside has corresponding teeth. As the coils are electrically pulsed they attract/repel moving the gears along the tooth profile. They are therefore digitally controlled

One gear has a magnetic North and the other a South. Each coil is energised with opposite polarity to attract one gear and repel the other. Typically around 200 rotational steps per revolution can be achieved at 1.8° of movement per step giving very precise control 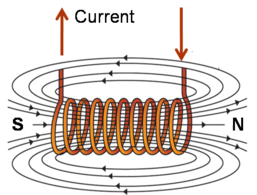 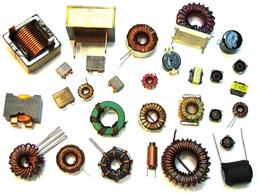 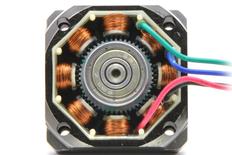 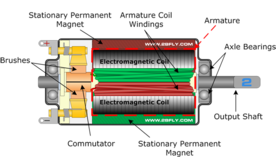 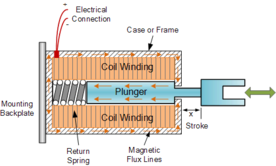 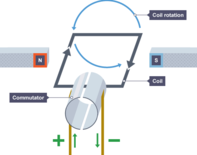 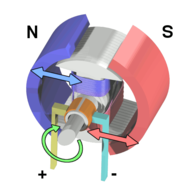 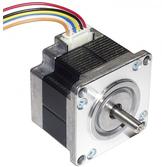