Drills are designed to cut holes into material using a rotary motion and a bladed cutting tool known as a drill bit. The drill bit is typically held and tightened within a chuck so that the cutting end is protruding to the required depth. Drills have existed in various forms throughout much of human history, but the electric drill was patented around 1927 by Black & Decker. By using an electric motor, drills became far more accessible

​The drill bit is the cutting tool required for drilling and always has circular cross section. They are typically made from high speed steel and are comprised of a 'shank', where the drill is held, and a 'twist', where the cutting edge is machined. The cutting edge runs in a helical shape up the drill bit creating 'flutes' which work like an Archimedean screw to remove material away from the hole when drilling. The tip of a drill bit is cut to a point at an angle of typically 118°, which is suitable for most materials. If the angle is decreased the bit will cut quicker, often required for soft plastic, and by increasing it will cut slower, often for hard materials. A wide range of tips and designs exist for different applications

When drilling into wood it is good practice to use drill bits with a pointed spur tip. This allows for greater accuracy when drilling and prevents the drill from slipping on the surface of the material. The tip would not be suited for metal as it would snap before it reached the cutting edge so often a centre punch/drill is used in its place before drilling

When drilling into stone or brick a masonry drill bit is required. This has a tungsten carbide chisel tip with a wider diameter than the cutting edge to cut through harder material such as concrete. They should be used on a lower speed due to the heat created through friction and are often used with hammer action drills

Spade or flat bits are used for cutting large holes quickly into timber and produce a rough finish which can often splinter the wood as it passes through. Typically, they are only used a low cost alternative to Forstner bits and only for use on softwoods and with a powerdrill

Forstner bits are use for cutting large holes into timber, typically up to 50mm in diameter, and have a large bladed cutting edge at the end of the shank. They are commonly used for cutting flat bottomed holes into material for applications such as kitchen cabinets for hinges etc.

Hole saws are used for larger diameter drilling up to 210mm and use a fixed twist drill bit to locate the centre, coupled with a large ripsaw bladed edge. The depth is limited by the depth of the blade and typically reduces with diameter. Material is cut with a saw blade and not cutting flutes and therefore a lower speed is required but increased torque. Typically they are used in a power drill on both wood and plastics but due to the saw design are only used for cutting through material not to a depth

The most basic method for drilling is the use of a hand drill. They are low cost manual tools that require the user to apply downward pressure whilst rotating the handle in a clockwise  direction. The large rotary gear transfers kinetic energy to the bevel gears rotating the shaft and turning the chuck. The handle is used to apply pressure and stabalise whilst drilling. These have been largely replaced by powered drills as they have become more accessible and are rarely used anymore 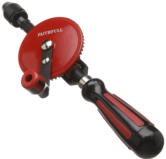 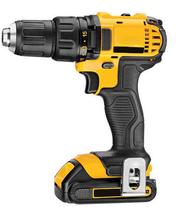 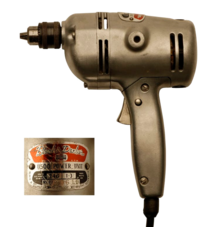 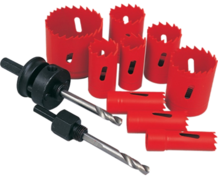 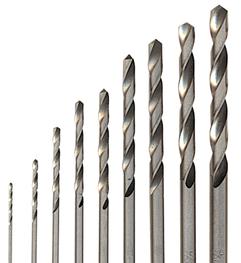 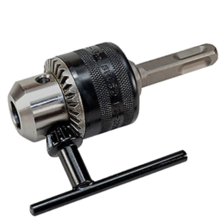 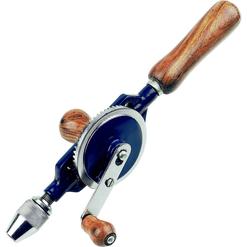 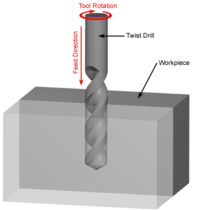