A capacitor is a component that is used to store electrical charge and its capacity is measured in capacitance (Farads). They can be Electrolytic or Non-Electrolytic in the way they are designed.

When powered a capacitor is charged instantly and can discharge rapidly. To reduce the rate of charge or discharge a resistor can be used in series with the capacitor. This is known as a time delay and can be calculated using the following equation:   T (s) = C (F)  x   R (Ω)

A capacitor has two features to identify the

Capacitors are typically found in power supply circuits (PSU) and are used for DC smoothing. When AC is converted to DC a positive wave is formed (blue line) which must be smoothed in order to maintain a constant voltage. They can equally be used in amplifier circuits to smooth audio input and output signals through 'clipping'

The capacitor constantly charges and discharges with the rectified voltage wave and reduces the extremes of the waveform to a smoothed DC line. PSU capacitors should always be discharged before repairs as they can hold charge for a long time after disconnecting. 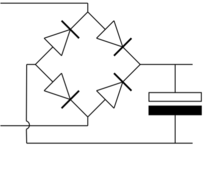 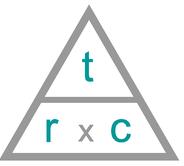 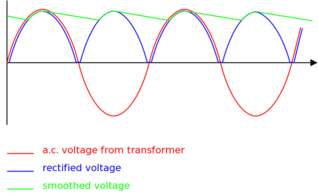